[stextbox id=’alert’]Fake Reviews like fake news are not good!  In this post, you will find out different ways to Stop Fake Reviews.  Your online business is your future and you must protect it![/stextbox]

If your guard is up, you’ll be able to follow these self-protection plans before you pull out your wallet.

But now, I’d like you to adopt a frame of mind. Remember, we’re talking about fraud artists who are out to make money by tricking you out of yours! So I’d like you to…

Get Mad as Hell!

[stextbox id=’black’]We know things are bad — worse than bad. They’re crazy. It’s like everything everywhere is going crazy… Well I’m not going to leave you alone. I want you to get mad… I want you to get up and go to the window and open it and stick your head out and yell… I’m mad as hell, and I’m not going to take this anymore.  Peter Finch, in “Network,” 1976[/stextbox]

Now that we have that off our chest, let’s look at what we can do, practically, to stop this despicable practice.

Stop ’em — Relying on the Law

Anyone can be targeted by a scammer… by reporting scams we can all play an important part in protecting ourselves and others from falling victim.Advertising Standards Authority, UK

Fake reviews are illegal. Across the world, they’re subject to misleading advertising law.

“The FTC’s mission is to rid the marketplace of “unfair and deceptive marketing” — and it has the authority to both fine and shut down operations.”(1)

And it’s not just the FTC:

So when we spot them we can expect the law to protect us, right?

This is a complex issue. For individuals and small businesses, solving it via legislation is not always easy. (For large businesses, it’s a bit easier. Amazon has recently begun to sue over one thousand people for writing fake reviews(2).)

But it’s certainly a place to start. If we don’t each play our part in alerting authorities to the problem, we are avoiding playing our part in a solution.

What You Can Do

If you come across a review you believe to be fake, let your national authorities know.  Report illegal practices at…

We’d love to see a powerful message sent by a judge who throws in a good punitive amount of compensation for victims who lose money, time (opportunity cost), goals, dreams, and self-esteem (those last 3 are “pain and suffering).

But there are other good opportunities for extinguishing fake reviews.

Google has recently launched an initiative called “Verified Customer Reviews” to protect the credibility of its various merchant services. So it has taken steps to manage fake reviews in its own merchant properties — but it has a much bigger problem with its search algorithm.

Google does not band-aid a solution. You may remember Googlebombs — high rankings organized by massive inbound linking programs. Some were publicly embarrassing for Google (and its victims!), but ultimately they solved it by getting better, not by specifically recognizing and detecting that one scenario.

We’ve seen it, too, with Panda and Penguin. Google released fixes for low-quality content and rank manipulating only when many businesses, big and small, had almost overwhelmed it with a flood of no-value, mostly regurgitated “content for content’s sake” and conniving link-based strategies.

In each case, Google only moved when the problem impacted the quality of a large enough number of search results to make a perceptible difference.

Fake reviews feel like specialized, long-tail pap that Panda should be spotting. Worse than no-value, fake reviews are of negative value. They lead consumers to make wrong choices.

That raises the obvious question…

When is Google going to worry about the huge problem of fake reviews, written by affiliates, that rank highly in the SERPs?

Although widespread, it may not yet occupy a high enough percent of Google searches to make it a priority. It’s a serious failure that enables malicious players to use fake reviews profitably.

If Google closes this door by penalizing fake reviews, the practice will stop — because it will stop being profitable.

Why Does Google Search Not Prioritize This?

Few victims of fake affiliate reviews think back far enough to realize that it was Google that ranked fake reviews to the top. By the time they realize that a product is nowhere near as good as the fake review suggests, it’s too late.

The more people who meticulously report fake reviews by those who either promote them or fail to discipline their affiliates for the widespread practice, the more likely that Google picks up on both volume and patterns of a problem.

What You Can Do

When you find a fake review, let Google know.

At the bottom of the search page, click on the “Send feedback” link…

This opens the “Send feedback” window.

Enter the text that explains the fake review you have discovered (text in the example below starts with “The following results…”). 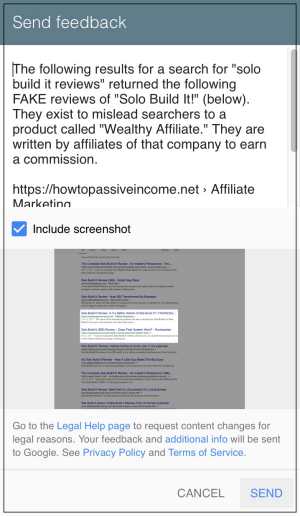 The example explains the search, and has…

These companies should take note. Just as Panda cleaned out content abuse and Penguin greatly reduced black hat manipulative practices (largely link abuse), the time for fake reviews is coming. Google’s business depends on delivering the best content that meets the search intent of each query. Theirs is the worst of all content.

[stextbox id=’grey’]As entrepreneurs and business professionals, we go to great sacrifice to reach the dream of success. The power of the internet can quickly become a nightmare, if you are not prepared… In the case of online reputation management, the best defense is truly a great offense.Blog e-Endorsements: Fake Malicious Reviews[/stextbox]

If you have a product that’s being victimized by fake affiliates, now is the time to fight back. Here, our experience can certainly point a way forward.

We dealt with the fake reviews attack in three separate ways.

We replaced opinion with the fact by creating a head-to-head study of our company vs. the affiliate company targeting us.

This, of course, results in fallout. Some attack us for attacking them (our scientific study becomes “the attack” despite their instigating “fake reviews”). Others offer weak arguments like “I don’t believe in statistics” or stick with “It’s just my opinion and I have a right to it.”

All are marked by the desperate nature of weak replies. That’s because there is no good answer to the truth. The fact is that it’s against the law to mislead a customer into reading a fake review that leads to a different product for profit.

How Does This Relate to Your Business?

If you have the opportunity to perform a study, or otherwise have raw facts that prove that fake reviews are flat-out bad, use them as widely possible.

Don’t debate on the fake site’s pages. That simply creates more content for them, which helps their ranking.

Some companies will say they don’t, even in their own forums, because they don’t want competition between their “customers.”

That would be a sad answer if it weren’t so laughable. The domain names who are logged into forums are available for all other users to see. Those folks are there to do business. They’re interested in each other’s sites as examples. They have their own sites, based on their own passions. They aren’t looking to start a business about a niche that they don’t know.

Make sure you provide real proof of success. Include domain names.

Make sure you have reviews of your own business by those people who genuinely use it.

These reviews stand out as genuine. The voice and nature of the content help them stand out from “scammy,” fake reviews.

Consider, too, creating a simple page that explains your whole fake review situation.

Are you still feeling “mad as hell”?

Or has arming yourself with information about how to spot and stop fake reviews made life that much sweeter?

Don’t Get Mad — Get Even

Legitimate companies large and small build trust in their brand by providing consumers with quality merchandise and services. It’s honest, hard work that often takes years to pay off. Online attraction marketers poach others’ brand equity to promote their own business model. It’s a manipulative scheme that only takes seconds to set up. (Idaho Business: “Fake Review Scams”)

We live in a unique window in time where the typical person can, at almost zero expense compared to offline business, start something that generates both profit and business equity.

Let’s summarize the actions every one of us can take when we come across a review — of any kind — that’s fake.

And finally, if you remember nothing else, remember one of the best pieces of advice about investing money in any product:

If it sounds too good to be true — it probably is.

It’s your future. Protect and maximize it.

This site uses Akismet to reduce spam. Learn how your comment data is processed.